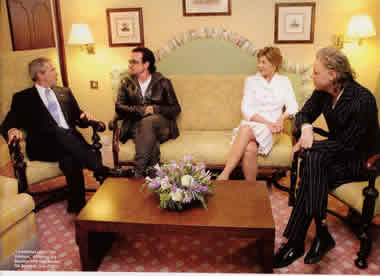 Bono tries to explain the concept of “international diplomacy” to a fan.

“So do I get to join the band? I can get you really good coke!”

Bush has trouble spelling the name of Bono’s band.

“You know, it’s funny, we’ve got a spyplane named after you guys!”

Bush learns how to dismantle an atomic bomb.

“You take Geldof, honey… I fancy this one.”

“You know why I bombed Iraq? I don’t like Mondays…”

The new season of Celebrity Leg-Crossing. Geldof wins this round…

A nervous beginning to the annual meeting of the Human Power Elite. 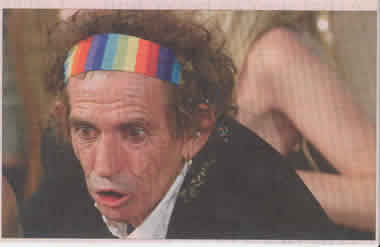 Keith Richard’s impersonation of Mick Jagger. Or possibly the other way around.

Keef discovers you can have drug-psychosis and senility at the same time.

New species of hairless gorilla discovered; and it can play guitar!

“All right, who took me flippin smoke?”

“If you hold your mouth like this, you can do smack, coke and speed all at once! I call it ‘the Hoover’.”

Keith Richards forgets to light his smoke… or even put it in his mouth.

Weird old guy kicked out of Idol auditions… He only knew how to play old Rolling Stones covers. 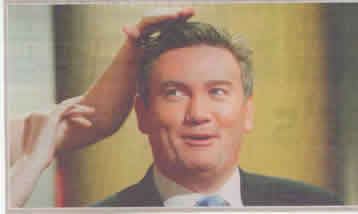 Eddie gets treatment for his big head.

One of the perks of owning Channel Nine is the young nubile head-strokers.

“If you want to fill Kerry’s place properly, your jowels need to be out here.”

Eddie gets fitted for Kerry’s crown.

Eddie gets assistance in the “rub your tummy and pat your head” trick.

The new season of Who Wants to Pat Eddie’s Head.

The weird thing is, those are Eddie’s hands. 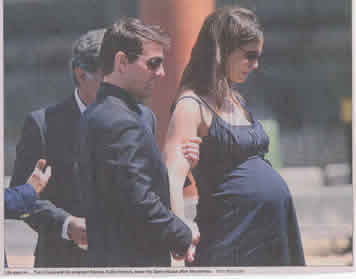 “Another word out of you, Katie, and I’ll do my Mission Impossible arm-twist!”

A scene from Night of the Thetans.

Tom supports Katie through the first stage of labour.

Katie is told that giving birth can sometimes be quite painful.

“If you can keep silent during my arm squeeze, then the birth will be no trouble!”

Tom and Katie at the funeral of her pagan past.

Katie ponders her future, as “that Nicole problem” is finally laid to rest.