– Kerrie-Anne always let the dolphin have the first fish.
– Suddenly, Kerrie-Anne’s surfboard came to life!
– Good Morning Australia was originally going to be The Dolphin RodeoShow
– Kerri-Anne’s first marriage just didn’t work.
– A carefree creature who’s happy to work for fish, and a dolphin.
– It can squirt water from a hole in its head – and ride dolphins!
– Before GMA, Kerri-Anne had to ride the dolphin to work.
– Kerri-Anne was always in favour of alternative transport
– Kerri-Anne’s solution to global warming: everyone has to ride sea-mammals

– “Bone me – please, bone me!”
– Who Wants to be Boned
– They’ve been working on those smiles for weeks.
– “The only boning we’ll be doing is in bed!”
– The winners of the 2006 Hypocritical Smile awards
– An awkward moment when Eddie and Jessica brought the same smile.

– “Fuck off, Darth.”
– “Up yours, Darth.”
– Oasis reject Darth Vader’s application for drummer.
– Villain in the next Star Wars film – Darth Gallagher.
– Oasis finally join the ‘70s.
– One of these people uses the force – the other is just on the sauce / the other uses pretty much everything else / the other uses whatever he can get his hands on.
– Oasis’ new look just not working. 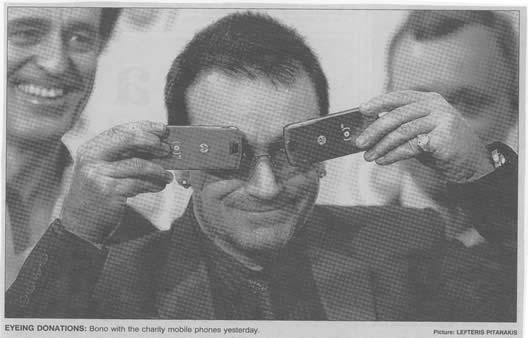 – Phono.
– Phono Bono.
– Bono – phone home…
– “And if I place these phones over my eyes, world poverty disappears!”
– Bono explains how impoverished third world children could be turned into cyborgs.
– Bono smiled politely while Costello was talking, but really, his mind was elsewhere.
– Bono demonstrates what the Zargons look like.
– The new Mobile Bono.
– Bono can send text messages with his mind.
– Bono is so futuristic he can now only see through cameraphones.
– Bono could be a force for good if only he wasn’t such an incurable dickhead.
– Bono likes to be his own paparazzi.
– The cutting edge in mobiles – or, as he prefers it to be known, “the cutting Bono”.