Hello, a brief look just suggested to me that I haven’t written ANY news since February. To be honest, just posting up the jokes has become a mammoth task, especially with “7 Days in 7 Seconds” churning through the stories in a matter of seconds. (Much as I’ve enjoyed that segment on the show!) So I’m sorry if you care what’s happening in my/our career/s. I suggest you don’t.

Anyway it’s been a very productive and exciting year so far. GNW has continued strength-to-strength and us writers even picked up an Australian Writers’ Guild AWGIE Award for Best Comedy – Sketch or Light Entertainment Script for the Jetsparrow Awards episode last year. Look – proof: 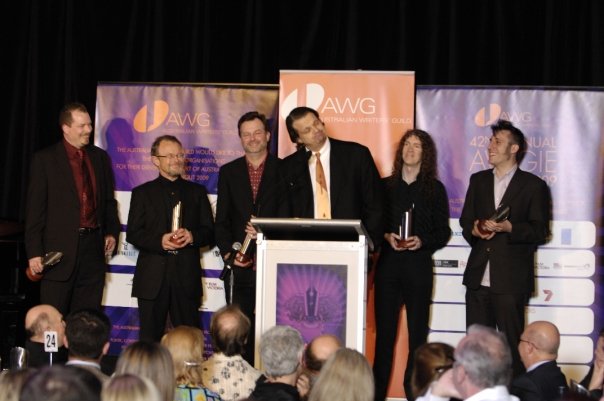 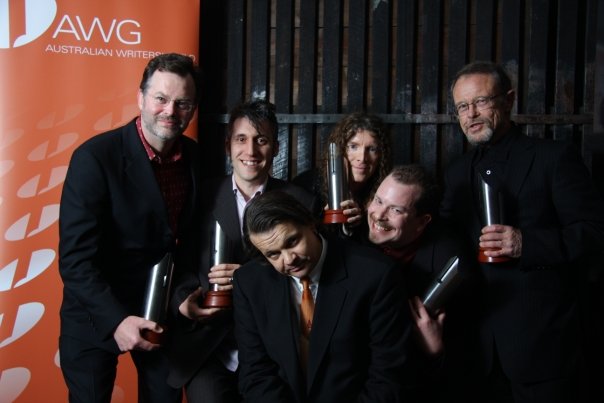 Even more exciting than I know it must look.

Meanwhile I went on three different workshops – a six-day retreat in Hepburn Springs on adaptation for The Butterfly Ball, a three-day genre hybrids seminar for The Devil’s in the Details, and a three-day sitcom seminar for Bruce, all thanks to Film Victoria with the latter one co-sponsored by the ABC.

Bruce is going from strength to strength, we’ve written the first episode with two entirely different stories before and after the workshop, and it feels like one day we may even be able to suggest you turn on your TVs and see what we’ve been working on. I finished up a first draft of The Butterfly Ball early in the year, have had some great feedback on it, and Film Vic are also funding that for an intense consultation with a Hollywood script expert before we get cracking on the second draft.

So between all that and raising 1 and 3 year old boys, it’s been a busy old time. I hope you can forgive me for my massive pile of random quality jokes and lack of conversation.

If not, I bid you good day.

One reply on “Excuses excuses…”

Well here is one for you, just to take the load off! Found this this morning: http://www.iinet.net.au/customers/news/articles/873961.html
A soccer mum who gained notoriety for openly carrying a loaded pistol to youth sports events has been fatally shot by her husband as she video-chatted with a friend, authorities say.